While Walking on the Moon

While Neil Armstrong was walking on the moon 50 years ago today, July 21, I was working in the garage of his parent’s home in Wapakoneta (Wapak)... covering perhaps the world’s largest news story as a reporter for The Associated Press (AP). (BTW: in the photo at the upper left, that's me interviewing Mrs. Armstrong.)

We got to Wapakoneta in time for the lunar launch on July 16.  We stayed 10 days in one of the few hotels in Wapakoneta ... each of us had our own room.

As I mentioned in my previous piece, Gene Herrick had 29 years experience with AP; I was a rookie with only 1½ years experience in reporting.  Gene shared some really great advice as we drove and worked:
*        Never check out of your hotel until you are leaving town.  You never know whether    you’ll be asked to stay another day.
*        Always eat a big breakfast because you don’t know when you’ll eat again.
*        Know your surroundings and how you can depart quickly if needed.

We covered the Armstrong family’s reaction to their son’s walk on the moon only when they came out of the house.  Usually, they held a press conference on the front lawn.  Those of us in the garage got an announcement of the time of the conference.

Gene, of course, was a master at getting and posting great photos ... of the family (when permitted), townspeople and the community.  While Gene was taking photos, I was writing stories focused on how Armstrong’s parents and his hometown were reacting to his moonwalk.

We finished our work when the astronauts landed safely on July 24.  Thinking the assignment was now over, I checked out of the hotel.  True to his advice not to check out until you’re leaving town, Gene did not.  Toward the end of the day, we got a call from the AP Office in Columbus.  “The Ohio Governor is coming to Wapak tomorrow to announce something.  So, you’ll need to stay one more night!”   Ah, Gene’s advice was spot on.  Fortunately, he let me share his room! 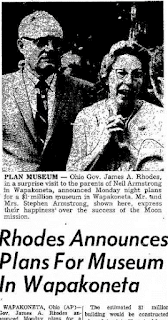 In those days, United Press International was AP’s main competitor and our goal was to put the story out first.  While I was ending dictating my story to the AP office, the UPI reporter came up to wait for the phone.  “Keep talking,” I told the AP office ... I don’t want to give up the phone to UPI.”

And my story was hours ahead of hers!  Ah, Gene’s advice to know your surroundings, was also spot on! 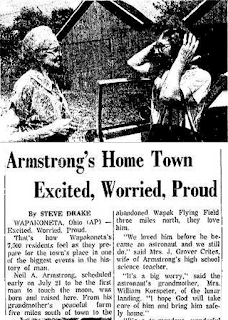 Fifty years ago, The Associated Press bureau chief called me to his office in Columbus, Ohio.  “I’m sending you – and Gene (photographer Gene Herrick) – to Wapakoneta.  I want you to do an advance piece on Neil Armstrong’s hometown before he goes to the moon.”

I was a young and inexperienced news reporter.  I’d been on the job less than two years.  Fortunately, Gene Herrick had 29 years of experience with much of that time on major news stories.

We scheduled a one-day trip from Columbus to Wapakoneta, about 90 miles.

Gene drove.  And, as he did, he began sharing stories of his experiences with AP ... some really valuable lessons for a young reporter.  And, we planned who we should see and interview while in Wapak (the common name for Wapakoneta).

We stopped first at the offices of the Wapakoneta Daily News and visited with editor Glenn McCoy.  He was very helpful even though the Daily News was not a AP member and got its national and international news from United Press International (UPI).  They agreed to let Gene process his photos in their photo lab ... in exchange for having access to his photos.

At the time, Neil’s family was off limits.  Time Magazine had an exclusive contract with families of the astronauts and first chance to interview them.

I was somewhat familiar with Wapakoneta as my wife grew up in Anna, Ohio, just 13 miles south.

We (mostly through Gene’s persistence) uncovered the location of the Grandmother’s farm south of town.  So, off we went.  It turned out that the Grandmother was not included in the Time “gag order.”  And, both Grandmother and Mrs. Armstrong were at the farm outside enjoying the nice spring weather.  Mrs. Armstrong, of course, politely declined to be interviewed.  But, Gene cleverly maneuvered himself to be able to get Mrs. Armstrong in the photo while he was taking photos of the Grandmother.  And, we had our key photo for the story!

On the way back to Columbus, I mulled over how I would write the story.  What should be my lead?  Which interviews should I include?  How do I properly report the feelings of a small town about to be the hometown of perhaps the biggest news story for centuries.

About the time we reached Columbus, I had my lead ... “Excited.  Worried. Proud.”  It was short, sweet and easy to repeat.  And, it summed up the feelings we picked up during our day in Wapakoneta.

Once I had the lead, finishing the piece was pretty easy.

My story hit the wires (including the national “A” wire) on July 3 ... the papers started printing it on July 4.

A month later, Gene and I returned to Wapakoneta and covered Mr. and Mrs. Armstrong while their son was rocketing toward his historic walk on the moon.

What Business Are You In? 10 Tips for Small Business Success

“If you don’t know where you are going, any road will get you there.”

Unfortunately, today’s businesses, companies & retailers don’t have a GPS offering directions.
But, no matter what you’re doing today, you need to stop, take stock and decide – what you’ve always done – but what you should be doing to run a successful business.

Back in the 1990s, my CEO boss was fired and I was “invited” to leave with him.  With a daughter entering an out-of-state college, it was panic mode.  While searching for a job, a contact at a large corporation asked me to give him a proposal to manage a series of meetings for his company.  Writing the proposal for him was easy; coming up with my fee for the assignment was difficult.  So, I asked friends, most had no idea.  When one heard the client’s name, she said “charge a lot.”  And, I responded, “What’s a lot?”

Well, I got the assignment.  And, in the next 12 months, I acquired additional clients and had to hire staff and rent office space.  It was then that I realized rather than finding a job, I had started a company!

Now what?  I did not plan on starting a business and I had no training for it!

During this discovery process, I realized most of us have little education or training about how to run a business.  Most of us are professional specialists with little to no business knowledge.  That’s one reason most small businesses go out of business.

Fortunately, I had many mentors to guide me as I built my company in scope and in number of employees.  I ran in to cash flow problems more than once in the first 10 years.

Based on my experience, here are some key questions for small business owners:

2.   Do you monitor and project your cash flow?

4.   Do you know what your staff/employees cost?  Are you looking at total cost: salaries, FUTA, SUTA, health care, retirement, etc.  In my case it was 2.5 times salary.

5.   Do you know the tipping point between profit and loss?  In a service business like mine, anytime my personnel costs exceeded 60% of total revenue, I was losing money.  As an agency friend told me, “it’s better to be a half-staff short than a half-staff long.”  When I started pushing close to 60%, I knew it was time to find another client and/or reduce staff numbers.

6.   Do you know how to take advantage of the internet and big data to benefit your brick & mortar operation?   Your customers and potential customers expect your company to be internet-savvy. Blame it on Amazon!  If you’ve ever purchased something via Amazon, you know they send reminders saying ‘because you liked x, y or z, you may like this.”  Just the other day, my wife received this email from Bed, Bath & Beyond. 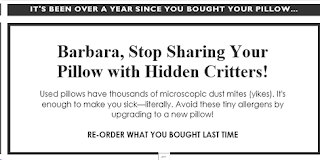 Interestingly, my wife who had been complaining about her pillow but hadn’t acted on it. Think of its power for the store.  It “drove” her to the store to purchase a new pillow.  That is the power of the internet and the use of Big Data to personalize messages to your customers.

7.   Do you worry about competition from Big Box Stores?  Remember, your staff can be your competitive advantage ... IF ... you hire right and develop the skills/expertise they need for your to prosper.

8.   Do you have an exit strategy?  When it comes time to “get out of business,” how will you do it?  Just close the doors?  Turn it over to a family member?  Sell it to someone?  One of my mentor’s told me “every business owner should assume he/she will sell it at some point.  So, build your company, its systems and its profitability with a buyer in mind.”   And, when it’s time to sell, hire a business broker to sell it for you.

9.   Does your business focus on a specific area?  Or, are you more of a generalist?  (Tom Shay shares his story of his retail store.  Should he sell only one brand of paint thus being an "XYZ brand store" or should he sell multiple brands and be a "Paint Store?".) When I first started my own association management business, a company offered me a contract to research and write a company brochure.  I asked a mentor for guidance: “Steve,” he said, “do what ever rings the cash register.”

What’s going on with your company, business or industry?  What are you doing?  Are you ringing the cash register or wringing your hands wondering how to survive?

My oldest brother ... an orthodontist ... showed me the way.  He straightened teeth (what he did).   But he recognized he was in the business of creating happy smiles.  So, he created a SMILE MAKER persona and used it on his business cards, in his ads, on his license plate and even the name of his boat!  By the Way: My brother also shared that dental school only taught him how to be a dentist and did NOT educate him about how to manage a dental practice.  He had to learn that on his own to survive and thrive Much of his business strategy and success came from a Study Group created by and facilitated by one of his major suppliers.

When facilitating strategic planning, I include focus on a 2-part question:
•     “What do you do?
•     What business are you in?”

A year ago, I asked “what business are you in?” during a planning session of a multi-million dollar company.  It got interesting responses:
•     The retailer and distributor members of the task groups thought the company should be  focusing on solutions, helping businesses be better businesses, etc.
•     Meanwhile the participating company staff responded “but, we’re a manufacturing company!”

My response to them:  “Manufacturing is what you do not what business your are in!”

And, I added, if you don’t help your retailers improve their businesses and they go out of business, how much longer will your manufacturing company survive??