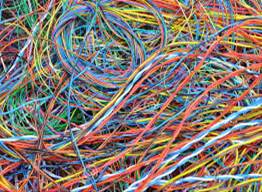 Change is all around. Some respond better than others. Association boards and association executives have the Duty of Foresight. That means a duty to the organization to monitor trends and adjust association strategies to fit the changes.

A recent trip through the Kansas City airport highlights three changes that illustrate how – without modification – change creates chaos.

Arriving/departing the KC airport (MCI) is a stark reminder how change creates chaos.

Then massive changes resulted from hijackers and terrorists that resulted in new security processes and TSA screeners.

The short walks morphed into twisting hallways as passengers enter and egress from special secure areas. And, once inside the secure area, passengers crowd in to the cramped space remaining with limited access to restaurants and bathrooms.

While the MCI airport responded, its “bricks and mortar” limited the success of the response.

Mobile devices transformed power needs for travelers. Low battery passengers scrambled for power outlets in airport terminals like they used to rush to pay phones. You see people on floors near any power outlet. Or, running power cords around chairs in airport restaurants to connect to a scarce power outlet. Some airports – but not all – have responded by adding power outlets to airport seating, adding “standup tables” equipped with power outlets or installing “charging stations.” But, where are the rest of the airports in responding to this need?

The increased fear of germs has led many people to use towel papers when they open doors after washing hands in restrooms. Soon, used towels piled up near restroom doors. Some facilities – but not all – responded with waste baskets near doors. Where are the rest of them?

Change and the response – or lack of it – applies to associations and association governance.
Governing board processes developed 40 to 50 years ago don't work as well in today's technology-driven world. Big boards with layers of committees and elaborate schemes in the officer track tend to bog down associations and deter younger members from leadership.

Some associations cling to printed quarterly newsletters or magazines even though many members have switched to social media and the Internet. Many association websites remain static relics of old information rather than vibrant knowledge centers.

As your association begins 2017, pause to examine these and other changes that impact you and your members. Meet members where they are not – where they have been!
Posted by SCD Group at 4:44 PM