14 Tips from a PR Hall of Famer 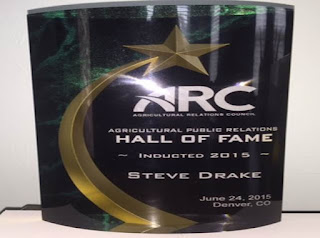 Editor’s Note:
Last Wednesday, I was inducted into the Ag Public Relations Hall of Fame. What follows are the tips from my career that I shared during the induction ceremony. Providing background for each tip makes this post extra long ... but what the heck, how often do you get inducted into a Hall of Fame?!

I’m going to share a few stories that I hope provide useful tips for your professional career.

My life in agricultural public relations began when I was growing up ... I just didn’t know it at the time!

I grew up on a bull farm. My dad was a pioneer in the AI business ... which then stood for artificial insemination. Part of Dad’s work in the 1940s and 50s was convincing dairy farmers that AI was better than the backyard bull.

Those early experiences included ...
With those experiences, is it any wonder I ended up in public relations? Yet, despite this background, my career in agriculture was an accident.

During my life, I have benefitted from a series of “accidents” that some call “God Winks.”

My journey into agricultural public relations began in a cow pen on a ranch in Foraker, Oklahoma. During a long-ago discussion in that pen, a stranger encouraged me to switch from pre-law to agricultural economics. When I got to Columbus, I switched to ag and it forever changed my life.
TIP 1: Don’t overlook signals, no matter how slight. An accidental discussion with a total stranger led me to a career I didn’t plan and to the woman who would become my wife!

While a student at Ohio State, my lucky timing allowed me to play varsity ice hockey. A year earlier, varsity hockey did not exist, three years later OSU offered hockey scholarships which would not have included me! Tom Bedecki – one of my coaches – gave me good advice: “Drake, you’d be a lot better hockey player if you were more agile, hostile and mobile.”
Those are pretty good words for living in PR.

TIP 2: Mobile: being on the move.
TIP 3: Agile: being flexible.
TIP 4: Hostile: paying attention to details.

Here are some quick lessons from my career ...

After college graduation, I became a news reporter for The Associated Press (AP). The job resulted in two “accidents.” When I was a senior, the AP Bureau Chief scheduled interviews with journalism majors. His schedule was so filled that they assigned two students per 30 minutes. Even though I was an ag economics major, I signed up. Luckily, the j-student scheduled with me didn’t show up so I had the full time with the Chief. The next day, I called to see if I could come to the office and meet with him. (He later told me that I was the only person who followed up.) As luck would have it, I was only looking for a six month position (so I could go to grad school in the fall) and he had a six month opening (because one of the reporters had been called to six months active National Guard duty.) The AP taught me to write and write quickly! One of my assignments involved covering Neil Armstrong’s parents while he walked on the moon. And, I had the great fortune of working with veteran AP photographer Gene Herrick. I soaked up as much as I could of Gene’s experiences, stories and wisdom. When not covering the moon walk, I marveled at Gene’s instincts for news photography. During the first snow of the season one year he grabbed a photo of a snowball just as it was about to hit the toothless smile of a child. A priceless photo and a “trick” that I successfully used later in my PR work.
TIP 5: Always followup.
TIP 6: Use (and improve on) what you learn from those more experienced than you.

I left the AP for a public relations position at Ohio State. Four years later, I accepted the offer to become PR director at Clarke, a woman’s college in Dubuque. Some thought I was crazy to leave Ohio State for a 600-student woman’s college but it gave me a chance to test my PR ideas! And, being the only woman’s college in Iowa was a great PR advantage. For example, I stole Gene Herrick’s snow picture idea and on the day of the first snow, I called some students and convinced them to have a snowball fight. My picture of their fun – with the distinctive Clarke spires in the background – ran in newspapers across Iowa. When I started at Clarke, the U.S. Title IX legislation was “forcing” colleges to expand women’s athletics. Iowa was home to a hugely popular 6-person women’s high school basketball. Yet, I discovered Clarke did not have a basketball team. In fact, its old gym had been converted to a theater for the drama department. I convinced the Clarke administrators to start a women’s basketball team so we could get on the sports pages. They convinced a nun to return as my PR assistant and head basketball coach. And, we earned fantastic media coverage in our first year!
TIP 7: Say yes, even if it means getting out of your comfort zone.
TIP 8: Find the uniqueness within your organization and use it in your strategic public relations.

From Clarke, I moved to Albion College in Michigan where, among other jobs, I was the sports information director. It was an inspiring time as both the football and basketball teams earned invitations to Division III championship games. One Friday, Mick McCabe, a sports writer with the Detroit Free Press called and asked, “Steve, are you going up to the Alma (football) game tomorrow?” “Yes,” I said. To which Mick responded, “Would you call me with the score and highlights?” I said, “Mick, the home team is supposed to call in the game results.” His response surprised me: “They are but they never call when they lose.”
TIP 9: Work with the news media even when it is bad news.

After two years at Albion, I accepted an offer to leave college PR and moved to association public relations for the American Soybean Association (ASA). The Friday before I started, the ASA board officially voted to move its headquarters from Iowa to St. Louis. On Monday, I met with each staff member and asked three questions: 1) who are you? 2) what do you do? and 3) do you want to move to St. Louis? Only one wanted to relocate so I got to hire my entire staff. This gave me a really great opportunity to hire and build my own staff team.
TIP 10: Hire great people, give them your vision and turn them loose.

Another accident: after 15 years, ASA asked my boss and me to leave. While looking for a job, I received a call from Monsanto’s Jerry Neff (another Ohio State alum) asking me to do some contract work. It shows it is not who you know but who knows you. As I searched for a job, I did Monsanto contract work. Then, a new contact meant I needed to hire staff. At that point, I realized I wasn’t looking for a job; I had started a company! Thus, Drake & Company was born. By the time I sold it in 2011, we had 28 staff! My first client – Alpha Zeta – came aboard in 1994. Our first task was to create, organize and implement a Centennial celebration. To create “buzz” about the Centennial and to build attendance at the Centennial event, we created a Centennial Honor Roll. This recognized the 100 most outstanding members and a group of 100 outstanding leaders who were not members. They included a Nobel prize winner, a sitting U.S. Senator, corporate CEOs and more. The Centennial Honor Roll worked magic as more than 140 of the recipients attended to receive their medallion. In addition to the buzz, AZ had record attendance for its annual meeting.
TIP 11: Being fired is not fatal and may lead to unknown and unplanned opportunities.
TIP 12: Network - because success often comes from who knows you.
TIP 13: Dream big and see what happens.

Another accident: The National Christmas Tree Association created the Christmas SPIRIT Foundation in 2005. We created but then “shelved” – because of the lack of money – the idea for a Trees for Troops campaign. That October, our PR director received a call from a FedEx Freight agency wanting to work with us on NCTA’s White House Christmas Tree project. He told them that would not be possible but mentioned the Trees for Troops concept. Less than 40 days later, fresh farm-grown trees were headed for military families on FedEx trailers! We have now reached more than 122,000 military families with this spirit of Christmas.
TIP 14: Big dreams are possible but be sure everyone on your staff knows the ideas ... just in case they get a call from someone such as FedEx!

In summary, watch those “accidental” moments and be agile enough to go with them!
Posted by SCD Group at 4:44 PM