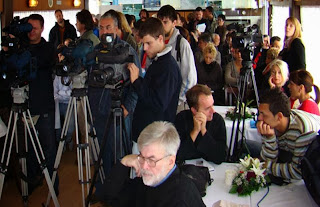 That is the Question--and here is one answer
Guest post by Sheri L. Singer, President, Singer Communications

SCD NOTE:
When I started working for nonprofits a few decades ago, we'd hold several press conferences every year--at our annual meeting, after testifying on the Hill (often as a member of a coalition), to announce the results of a study and more.

Today, I advise my association clients not to hold press conferences. The only caveat may be if you have an A-lister like Jennifer Aniston or President Obama. And even with an A-lister, colleagues say they have had trouble getting journalists there.

The dramatic changes in today's newsroom means there are fewer reporters--even within top tier outlets--covering more topics, for more mediums (video on radio websites, etc.) and in less time (who files the story first?).

I suspect most journalists have a love/hate relationship with technology. The Internet adds even more pressure for reporters to be the first to break a story. After all, news is a business and being first contributes to the bottom line.

All said, reporters are much less likely to leave their desk to attend a press conference then ever before.

But there are ways for your association to get its story heard.

Instead of a traditional press conference, I advise my clients to hold a telephone news briefing where reporters can call in from their desk, listen on mute, and ask questions at the end of a short briefing. This press conference by phone is typically less expensive than an in-person press conference, allows nationwide participation, and BONUS, allows you to reach hundreds of reporters with an advisory announcing the briefing.

Here's how it works. The Center for Plain Language was planning to release a new report evaluating how well federal government agencies were adhering to the new Plain Writing Act. I suggested they assign grades to the federal agencies and release a Plain Writing Act Report Card on a telephone news briefing with the congressman who authored the new law.

We attracted 12 reporters on the call, conducted 20 offline interviews and had more than 50 outlets run the story. We obtained more than 500M media impressions including NPR, The Washington Post, MarketWatch and yahoo.finance.

Here are a few questions for deciding whether to hold any press event:
Finally, there are many other ways to effectively work with journalists--holding a roundtable, giving a tour, offering pre-briefs before an event or announcement, reaching them through digital media, etc.
The changes in today's newsroom coupled with technological advances has made working with journalists even more challenging--but it's also made it an exciting and dynamic time--full of possibilities for 2014 and beyond.

As president of Singer Communications, Sheri L. Singer has worked both on staff and as a consultant with more than 50 nonprofits providing strategic communications counsel. She serves on the American Society of Association Executives' Communications Section Counsel and on the board of the Public Relations Society of America's National Capital Chapter. She chairs the 2014 PRSA International Conference PR Committee. Catch her speaking at one of five ASAE national events in 2014.
Posted by SCD Group at 4:44 PM