On the Road with Charles Kuralt and Association Membership 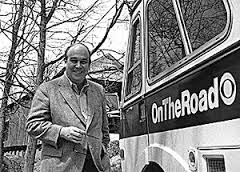 As a young AP news reporter in Ohio, I loved CBS’s On the Road with Charles Kuralt ... the quirky video stories that ended many of Walter Cronkite’s CBS Evening News shows.

As a reporter, I envied Kuralt and his freedom to gather such stories. Later, as a public relations professional, I desperately wanted to “place” a story with Kuralt. I got close once. He did a radio show based on information a friend of mine and I gave him.

One summer, the person responsible for the college lecture series sent over the list of speakers for the year so I could produce a promotional piece. And, Charles Kuralt was listed as one of the speakers! I called the lecture chair and said only half jokingly, “If you don’t get me dinner with Kuralt, I’ll not promote your lecture series again!”

Well, about a month before Kuralt’s speech, my wife and I received an invitation from Albion’s president to join him and six others for dinner with Kuralt. What an evening. As we walked across campus to the lecture hall, I asked Kuralt if he would join me and several of my PR students for an after the talk drink at a local college bar. He said, “That sounds like something I would do.”

I thought about storytelling and its impact on association membership and marketing. I thought about Kuralt and his quirky, humorous video stories as I read a piece on a Nieman Journalism lab research about the sharing of series versus fun stories at NPR.

Eric Athas and Teresa Gorman shared results including: via Nieman Journalism Lab:
Who is your association’s Charles Kuralt when it comes to finding really great stories among your members? These stories can create personality for your association as well as recognize engagement.

Athas and Gorman asked, “So how exactly can you make serious content shareable?” They suggested that you not wait until after the story’s already on your site. And offered five questions for you to ask and answer:

What’s the headline?
Write a headline first — before you begin crafting your story.

What is your approach to telling the story?
What’s the best way to convey the story?

How will this be different from what others have already done?
Cut through the noise.

Why will people share it?
Imagine someone coming across your story online — what will make them take the next step to share it?

What’s next?
Don’t ignore the story after it’s published.

Kuralt was an awesome story teller. His compelling video stories set a great example for associations and others seeking to connect with and/or audiences.
Posted by SCD Group at 4:44 PM