Be Quick But Don’t Hurry: A Game Plan for Association Executives 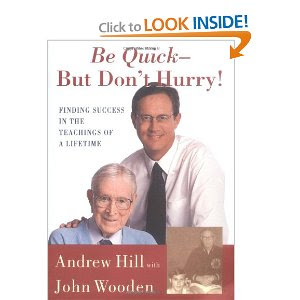 It’s been nearly 10 years since I first read Andrew Hill’s Be Quick - But Don't Hurry: Finding Success in the Teachings of a Lifetime ... a story from the life of John Wooden.

I was talking with a golfing buddy the other day and suggested he read it. To my amazement, he approached me the following Tuesday to thank me. He said he couldn’t put it down and read the entire book over the weekend.


That made me realize Wooden’s 21 secrets were fodder for a blog aimed at association executives and association volunteers.

Here is a summary about Andrew Hill from Amazon:

And, here are The Secrets of John Wooden

These are a pretty good game plan for association executives and their work with volunteers, members and staff.