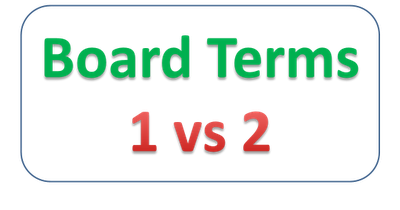 Establishing the length of terms of office represents a key governance issue ... especially if your association attempts to change the terms. (As I share below, I see 3 key reasons why one-year terms are better for most associations.)

Folks on ASAE’s Executive Management Section Collaborate are having an ongoing discussion on which is best for association boards: one year or two year terms for officers. Here is the original question and excerpts of the responses:

Barbara Tulipane, CAE, President and Chief Executive Officer of the National Recreation and Park Association, began the dialog with this question: “Does anyone have experience with a two year term for the chair? We recently changed our bylaws to allow this and we are struggling with how this impacts the other officers. The chair can choose to have a second year but its not mandatory.”

Here are some observations I’ve seen in my 30+ years with 16 different associations ... both as staff and as a volunteer officer:
Which term option works best?
My experiences lead me to prefer one year terms for officers for three reasons: