Generations by the Numbers: Why association Membership May Not Return to Pre-Recession Levels

I’m a volunteer on the board of a local professional association. Our membership has dropped four of the last five years. Our question: Is the drop related to the recession? Or, are there other factors?I’m in the camp saying that the member decline started before the recession and won’t return to pre-recession levels unless we adjust our membership philosophy and strategies.
Let’s start with the number behind my thinking: 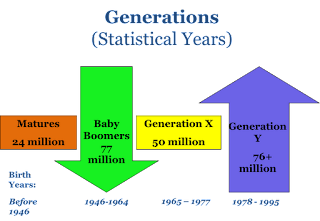 Bottom line is that there are about 30 million fewer Gen Xers than Boomers. So, just by the numbers, we should have anticipated membership declines as Boomers began retiring and, most likely, departing job-related associations.

So, if your association’s No. 1 benefit is “networking” and/or a “monthly luncheon meeting” (as is the association I’m volunteering with), you face a growing membership value question with the new generations who you need as replacements for departing Boomer members.

In the End of Membership As We Know It, Sarah Sladek has done a really great job in framing the issue and providing examples.

Well worth your read.

By the way, one new wrinkle in our local nonprofit: we’ve introduced a “$30 if under 30" dues plan as a tactic to recruit younger professionals. It is too early to see if it is working. And, since we have not offered any new programs or services targeted for Xers or Millenials, it will be interesting to see whether younger professionals will see value if/when they join at this lower dues rate.
Posted by SCD Group at 2:23 PM